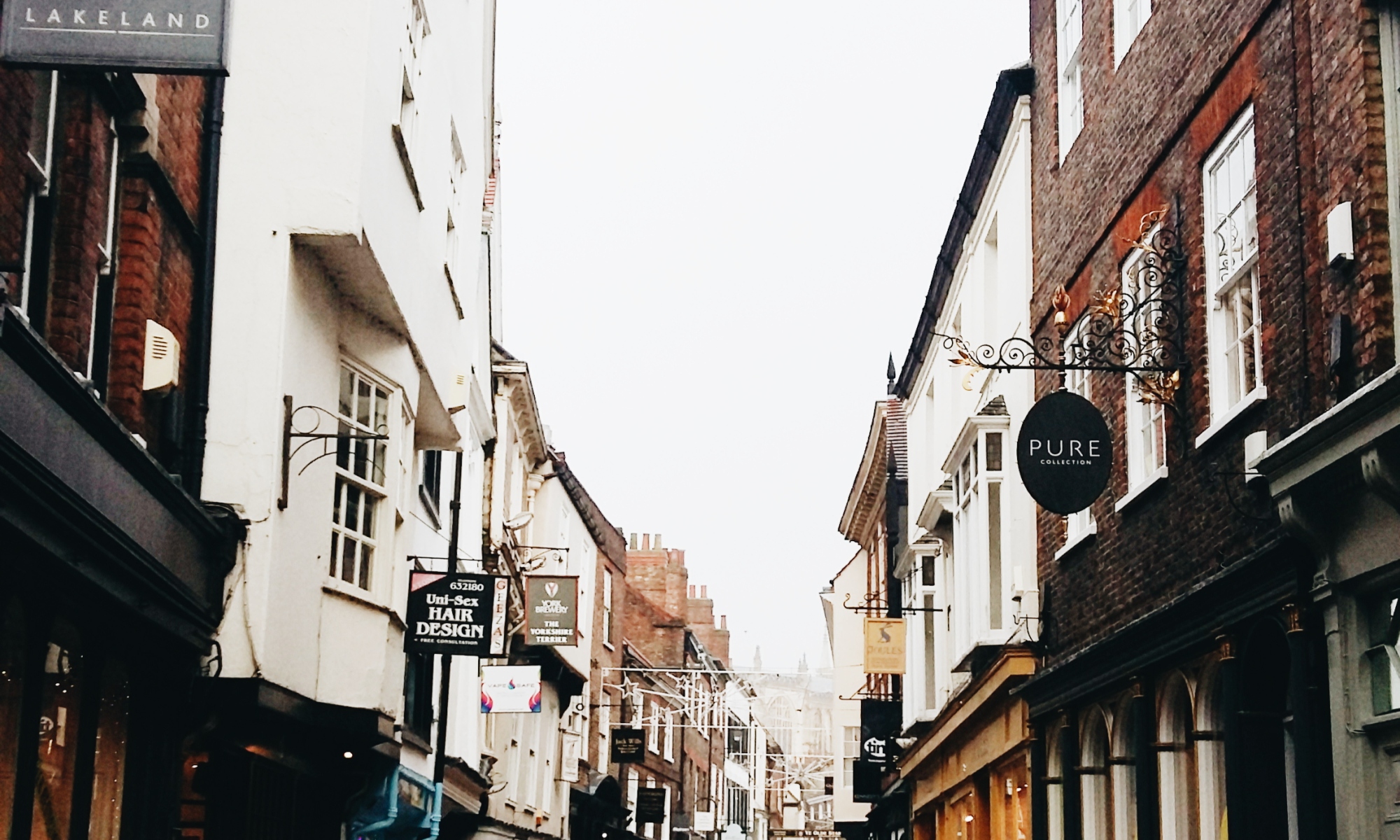 If there was only one way for me to describe York, I would begin with calling it a quaint little town with historic buildings and scenic views among the cobblestones and earthy grounds. Waly numerously told me how York looks similar to Colchester in Essex, but I never thought that they would be vastly similar to one another, albeit it seems to me that York is a larger replica of Colchester, if you like.

The train ride from Birmingham to York took two hours and a half, so it wasn’t so bad. Upon arrival, I was amazed at how huge the train station was. At least that’s my usual reaction wherever I go outside of Colchester.

Waly fetched me at the station not too long after and we immediately went for lunch near the York City Walls. Unfortunately, I forgot to take a picture of the Walls, but I probably did using my film camera! I’ll be sure to share it once I have all of my film rolls developed.

After doing a bit of walking around the city with Waly dragging my luggage the whole time (thanks, Waly!), we went through The Shambles, an old street in York which apparently used to be the base for a meat market and a slaughterhouse. The buildings were overhanging the street which I initially thought were intended for weather protection or shelter on the ground floor. However, that was not the case.

In the medieval age, houses were built by “jettying”, which is basically extending the upper floor space, making it look like it was jutting out beyond the dimensions of the ground floor. One of the reasons for the usage of this building technique is to prevent obstruction along the streets. This was commonplace when I walked through The Shambles, which was quite narrow on its own. Another reason for this, back in the old days, is that land taxes were really expensive, so people literally extended their space above the ground rather on the ground itself!

Towards the end of the street, there was a cafe that Waly had always wanted to bring me. It looked so cosy from the outside and we were tempted to go in right there and then, but we decided to wait until the next day after we went around the city.

On the next day, we went to University of York on foot, and it was surprisingly closer to Waly’s place than I expected. We dropped by at the barbershop for Waly to do his hair before he brought me around.

Along the way, we went into the woods on the lakeside. With my film camera hanging over my neck, I just had to do an impromptu photo shoot with Waly.

After a stroll around the campus, we took a bus to the city centre to go to this halal authentic Thai food restaurant. I ordered the green curry chicken with a side of jasmine rice. Hands down, it was the best green curry dish I have ever had!

Then, we went to visit York Minster, one of the largest cathedrals in Northern Europe. For some reason, the Minster reminded me of Malaga Cathedral and I was sure that the minster’s interior would strike an impeccable resemblance with the latter. I would have gone inside, but it was £10 for a whole year’s entry and I wasn’t even sure if I was coming back to York frequently. So, we went around the Minster before moving on to our next destination.

At the north of York Minster was Dean’s Park, a beautiful recreational park with ruins of an ancient archiepiscopal palace that was built in the 1200’s. The park was overlooking the river and we wanted to walk down the pavement on the riverside, but the water level of the river increased due to recent heavy rains and it seemed to me that the park was slightly submerged in the river.

As it was getting dark, we figured that it was time to go to The Flax & Twine Cafe, but it was closed! We ended up going into the tea house next door called Hebden Tea. I can safely say that they have the best tea selection in town, or perhaps in the whole of England! They infused different conventional tea flavours to create unique tea concoctions. There was some testers on their open window sills and one of the infusions was Earl Grey + Cinnamon and the flavour was a harmonious mix of warm, spicy and zesty! I never thought that Earl Grey would go so well with cinnamon. Definitely making some of my own at home!

In the end, we roamed around the city some more before we could find the perfect place to sit down and sip on some warm, well-brewed tea.

Finally, we decided to chill at Filmore & Union. The white and wooden interior was tastefully designed, with woven baskets, fresh greenery and industrial lightings manicuring the cafe to conjure a sense of warmth and comfort in the midst of winter. Admittedly, I found their baked goods to be rather expensive, but their herbal infusions were a lot cheaper! So I had a herbal infusion drink of agave, ginger, lemon and mint leaves with a bar of gluten-free almond brownie that came with a side of fresh raspberry puree. The drink was immediately a score from the first sip, but the brownie on the other hand was dry and crumbly and I didn’t like it one bit.

Afterwards, we went home to retire before a long journey to Netherlands. I didn’t stay long in York due to time constraint, but I was able to surmise and confirm that York is such a beautiful and student-friendly city to live in and I honestly don’t mind going back another time.

I’ll be sure to write about my trip to Amsterdam and post up more film photos from my travels over the winter break very soon, so stay tuned!